Twenty years old, raised and still living in (Doetinchem) in the Netherlands. At this moment I am carefully looking for the right education, which results in a lot of free time for me to work on my photography portfolio, this has led to an increase in the quantity and quality of my photographs. 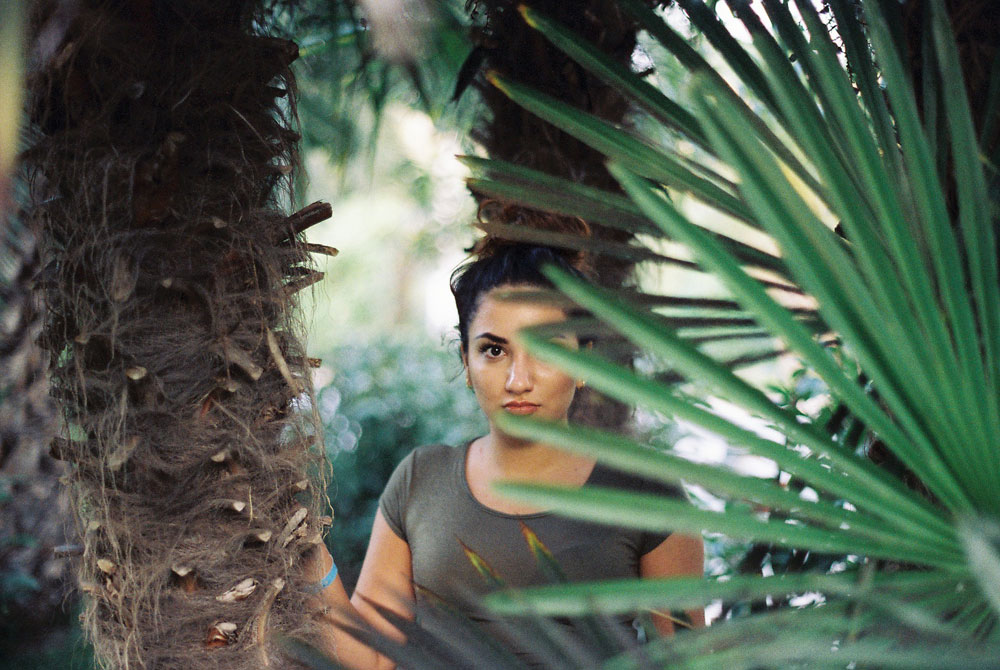 This time at the Mediterranean coast in Kusadasi, Turkey.I’ve had to focus manually for this one because the autofocus kept focusing on the leaves. One of my favorite photos. October 2015

My interest in film began before my official journey, one and a half year ago when I saw all those amazing works of film shooters on Flickr.com. ((Farbud Tehranci is one of the photographers that inspired me to start shooting film)). After a while I laid down my DSLR
because I didn’t find digital photography interesting anymore. I simply recognized that analogue photography has something special and passionate in it which lacks in digital photography, so around a year ago my journey officially began by buying disposable Agfa cameras to practice with. After four or five times shooting with disposables I made the move to a compact Canon Prima in December, enjoyed it a lot but I wanted to make more steps and improve even more. So around March this year I asked all the people I knew if they had any old SLR at home and it turned out one of my former classmates had one of those autofocus Minoltas with an excellent prime lens and gave it to me. At that moment my ‘wet film dream’ came true, I arrived home and ordered some expired film from the internet to practice with.

During the start of this journey I thought that it would be something experimental and temporary, but after my first two rolls with the Minolta got developed, I changed my mind and decided that this journey will last long and won’t be a short term project. 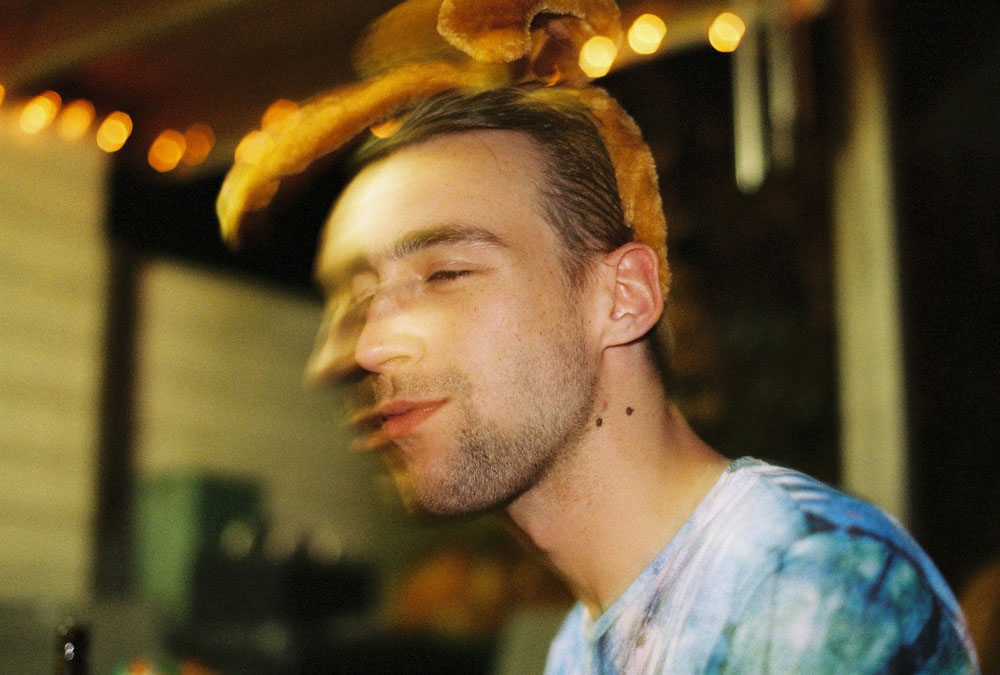 A friend of a friend at a birthday party. I think that he moved his face in a fast manner away to prevent being shot because the shutter speed was not that slow... he liked the outcome anyway. Many people told me they like this as a party photo due to the movement which gives it a kind of drunk, faded and light-headed expression. March 2015

To be honest I do not have the stereotypical gear bag some photographers brag about and like to show off. Mine is quite simple... Just two rolls of extra film (Kodak MAX 400) and my Minolta 7000i with its Program 3200 flash. 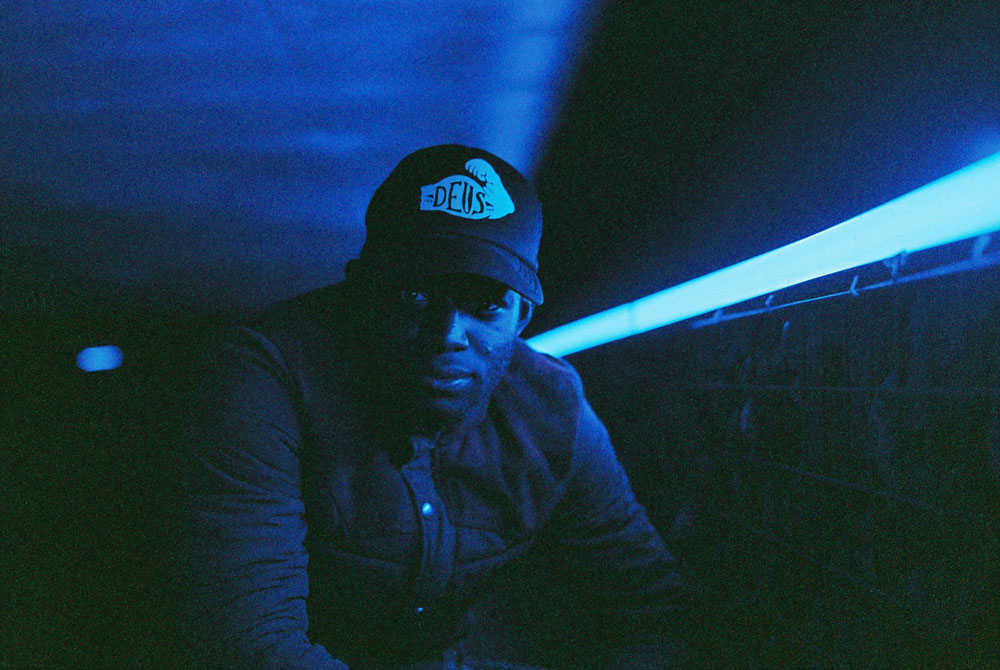 Drove here many times through this tunnel and thought to myself that I could use the beautiful blue lights for photography. So I simply did it a couple of days later when I went for a walk with some friends. August 2015

All the people depicted are friends and family. There is a lot of interaction since I have to instruct them, many of them tend to pose in the same way as you would for family photos, this looks very unnatural and is a waste of film in my honest opinion. Sometimes it takes five
minutes for them to forget that there is a camera pointing at them waiting for the right moment or expression to capture, but I’m not always trying to make them behave in a natural way. Sometimes I set up whole sceneries which isn’t an easy task either. It feels like you really have to control people in order to make them stand as you want and make them look as you want to create a certain expression. 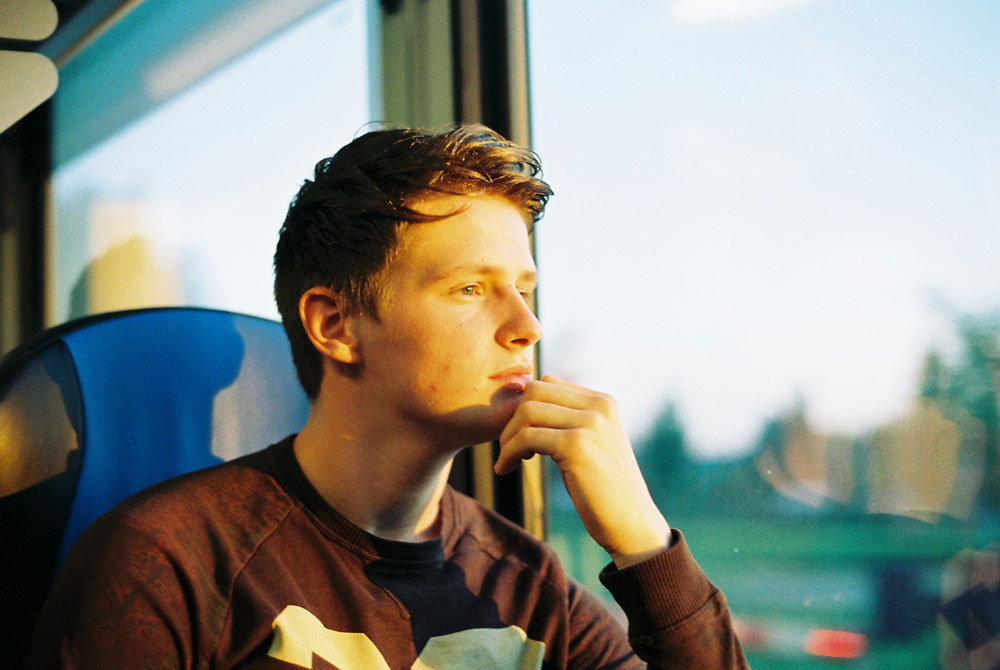 Low sun during a train trip with a buddy. I really had to wait for the perfect timing, hoping for some sunlight to leak through the clouds while waiting for the train to shake less to stabilize my aim. October 2015

Everything inspires me: Everyday life, rare events, hard memories, symbolism, other people’s advice and my own hectic mental state. There is no hierarchy from most inspiring to less inspiring, all things inspire me equally.

Do not doubt. Doubt will slow your progress and development down. Questions like: ‘’Is shooting film worth it?’’, ‘’Will it bring me further?’’ and ‘’How should I explain others that I shoot with a cheap old camera instead of an expensive one?’’ will not be fruitful. Just shoot and keep shooting.
Another piece of advice I would like to give is: Create your own Style(s), be unique and find something that works for you. Just don’t underestimate your creativity and let it flow. Be the one that brings in new ideas and styles. 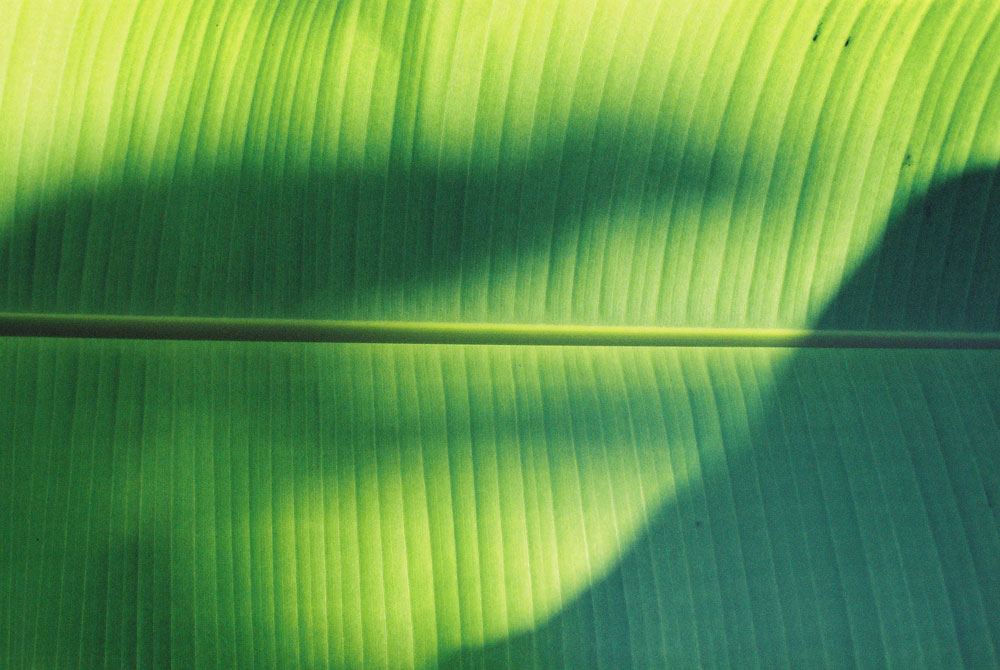 Inspired by nature and the way sunlight hits it. Just underneath a banana leaf somewhere around Kusadasi, Turkey. October 2015 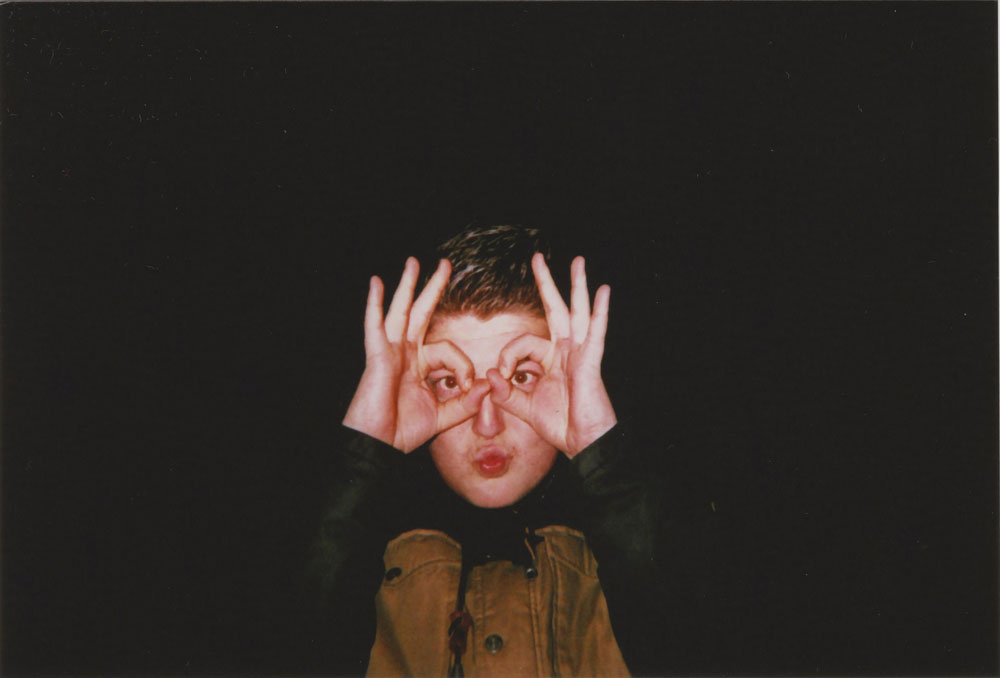 One of my friends making strange gestures while being a little bit tipsy at a birthday party.On this photograph he is impersonating an owl. I think this photograph summarizes my last teen years. September 2014 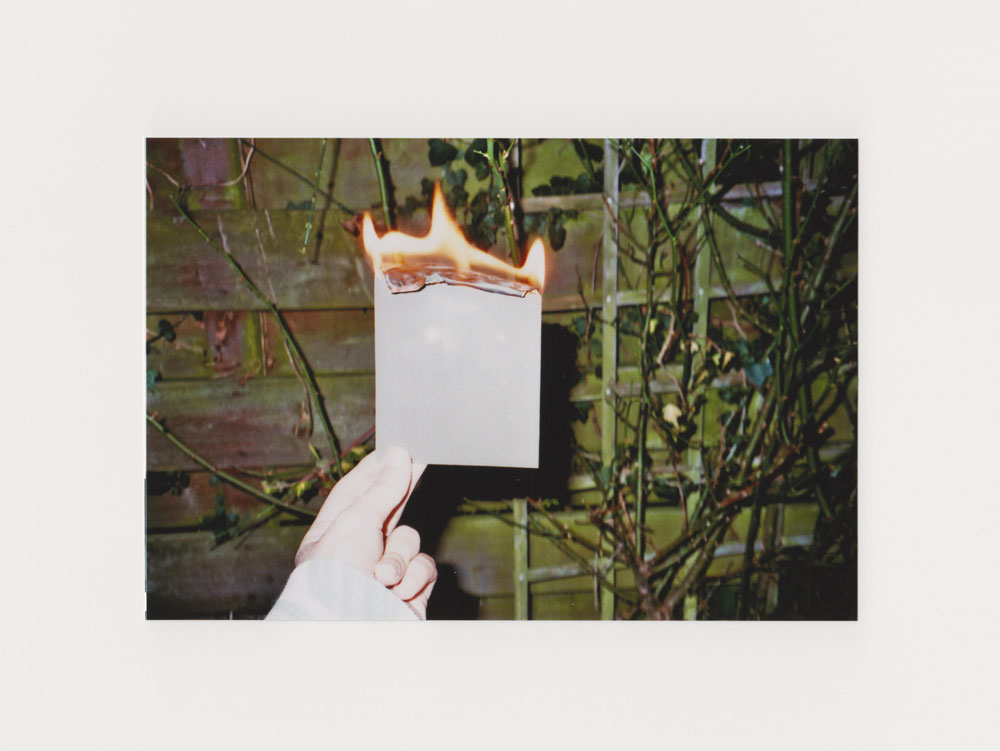 A shot I’ve taken with a compact film camera. I think it was the Canon Prima Zoom 70F. I’ve kept the scan edges on purpose. At that time I did not buy CDs but prints only and scanned them myself. I quit it when I started shooting with my Minolta SLR. This specific picture symbolizes my perfectionism as I like to erase a lot of worthless photographs and like to move on with only the few I deem worthy. December 2014 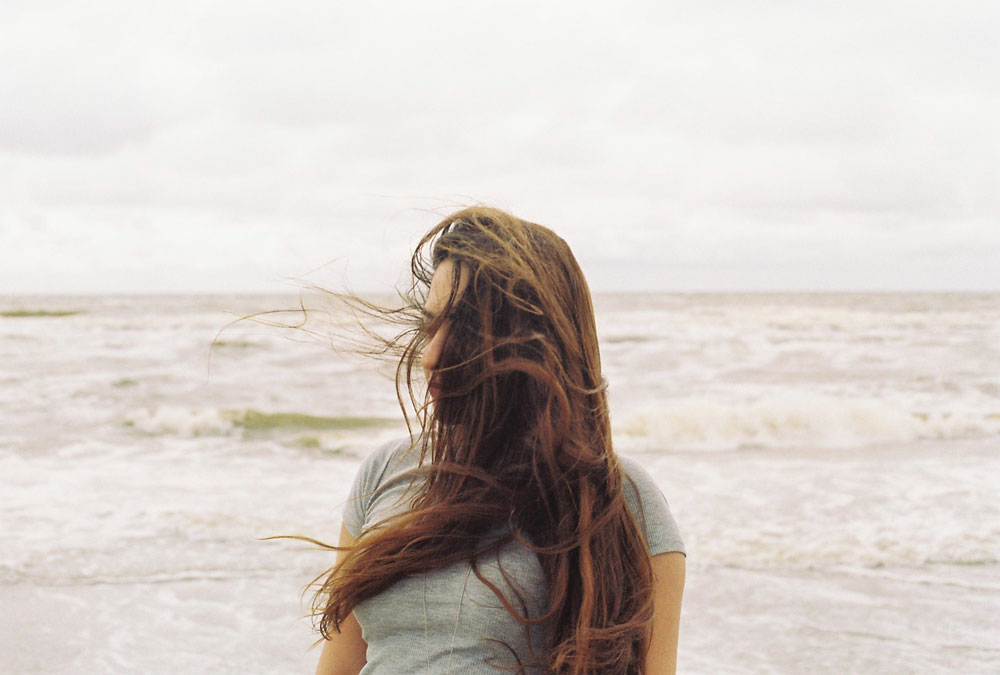 A relative during a walk on a North Sea beach at Bergen aan Zee in the Netherlands. It would be a sin if I wouldn’t have used the fast coastal wind for a portrait. August 2015 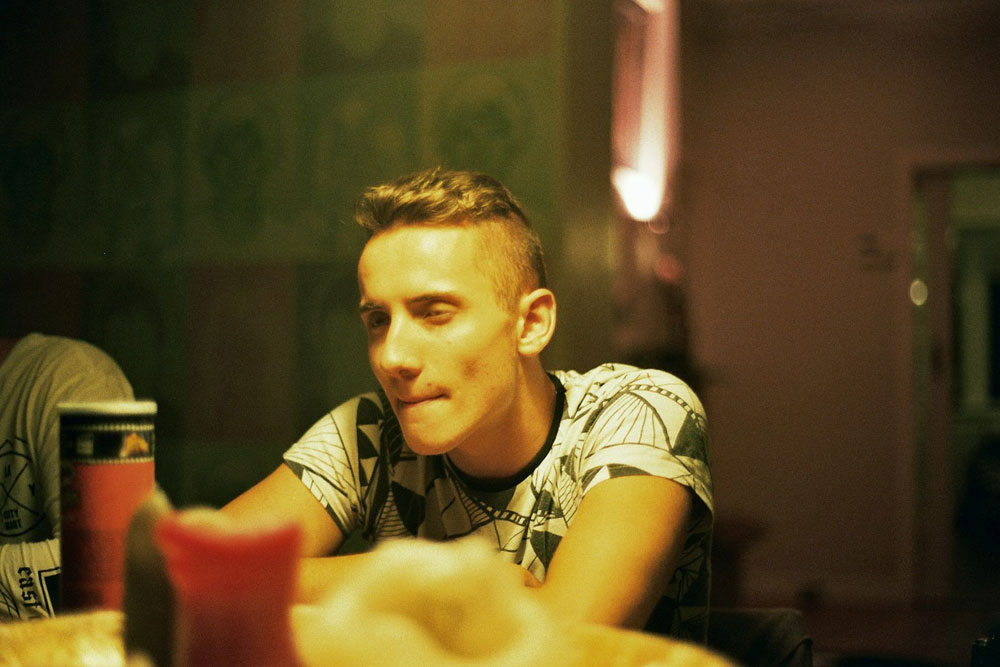 Another friend. This moment was captured at 5 AM and the fatigue was visibly kicking in at that moment. I always give people the chance to delete photographs or tell me if they don’t prefer them to be published. But this homie at the time did not care that much and is one of the few people I know who are not camera shy at all. So a special shout out to him there. August 2015. 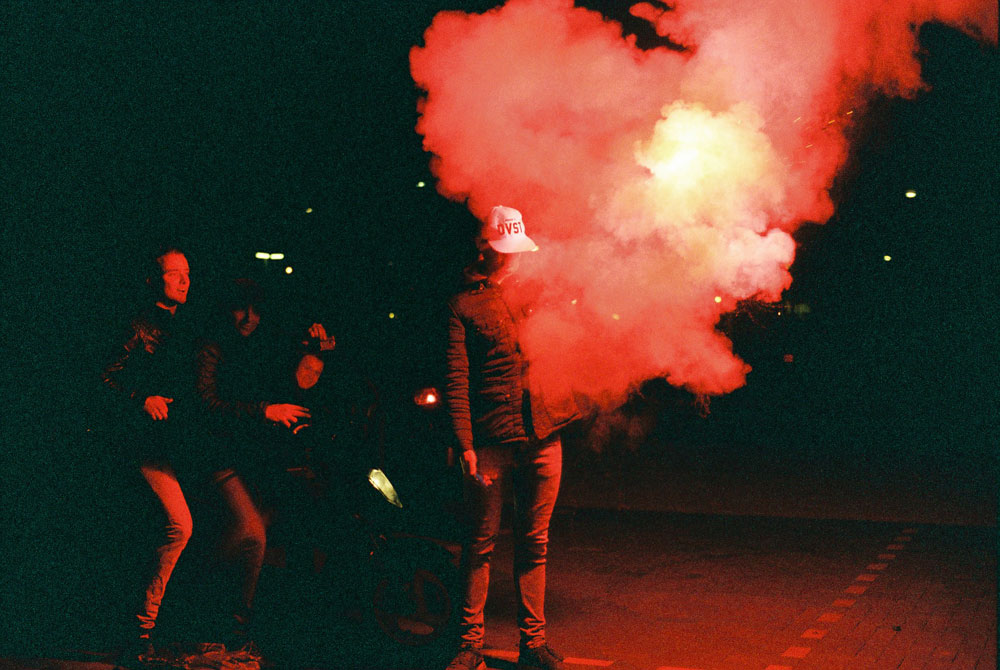 Celebrating our city’s soccer team made it into a higher league with friends. One of my favorites too. Loved for its color and light. June 2015