"The way film records light and the colours it produces cannot be matched by digital."

So I am 31 years old, I am from Dorking, Surrey, UK. I have just setup self employed working as a food photographer in the Cambridgeshire area, I do commercial work for restaurants, cafes, and bakeries in the local area. Prior to that I had worked as a photographer in the Royal Air Force since 2009, winning RAF Photographer of the Year in 2014. All of this work has been done through digital photography, due to the demands for turnaround times. 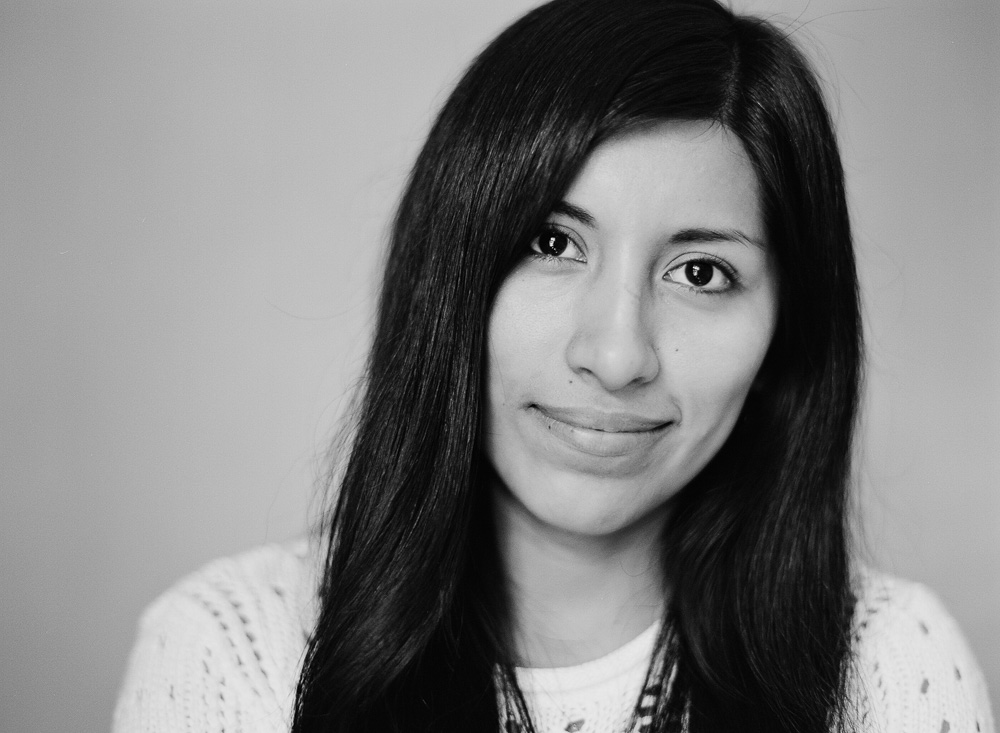 This is my wife Angie, it was shot in our bedroom just using available window light and I sed Kodak Tri-X as the wall in a turquoise colour, but I didn’t want the distraction of colour. I used a Contax 645 at F2 so that the narrow depth of field really draws your to attention in to her eyes. It always makes me happy to look at this photograph

I found a Rolleiflex TLR camera at my Mums house and enjoyed looking through the waist level finder, although found it hard to frame photographs, as I had been used to using DSLRs with pentaprisms so it took some practice to get used to everything being back to front.
I enjoyed the fact that it slowed down the process of photography, and forces you to think more about your shots as a photographer. I think you have to be patient in any form of photography, however shooting on film forces you to think more about the whole process of capturing the image. I find when I shoot digitally I always end up downloading way more images than I needed to take, where as shooting on medium format film you only have from 10-16 images on the roll so each shot counts.

I always like to push myself, and decided to shoot most of my personal work on film, the way film records light and the colours it produces cannot be matched by digital. I also believe that shooting on film helps you to become a better photographer. 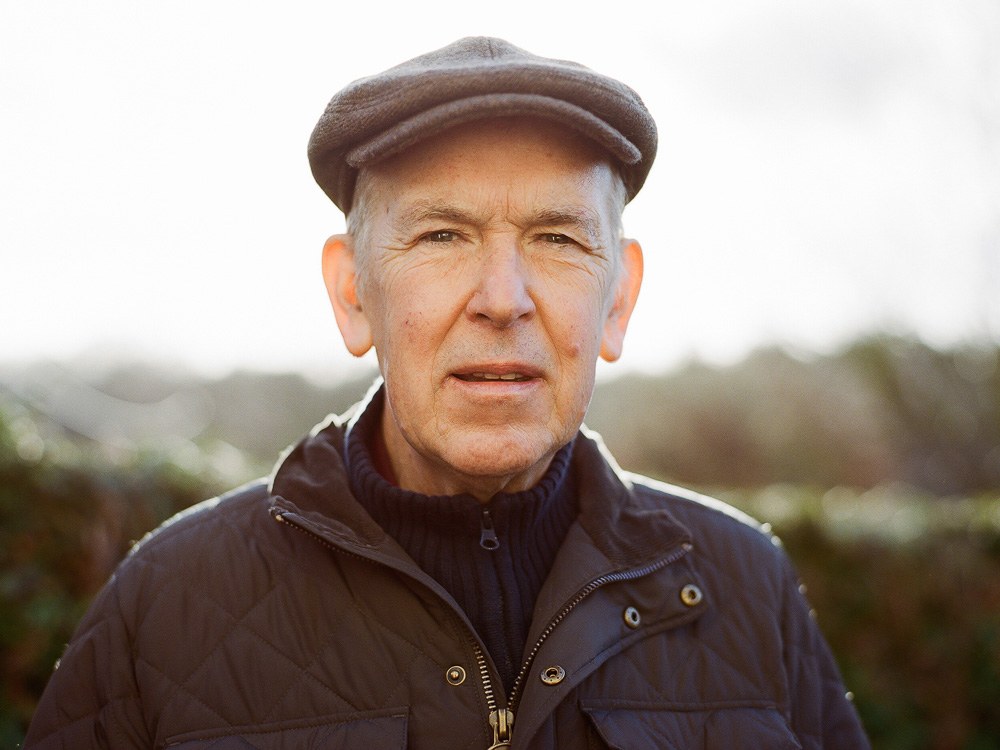 This is a portrait of my Dad, also shot on the Contax 645, but on Kodak Portra this time. Portra is my favourite film stock as the colours are amazing, you don't have to massively overexpose it (the weather and lighting in the UK isn’t that bright a lot of the time), and you can push it a couple of stops if you want to without it looking too grainy. Backlighting works so well on film as you can expose for the shadows without blowing out the highlights. My Dad passed away 3 years ago, and although he used to wear glasses, this photograph is most like how I remember him. He always wore flat caps and I prefer not having the distraction of glasses.

My first roll of film didn’t come out that great. I was using the Rolleiflex TLR and didn’t have a light meter and I tried using an app on my phone, but the images turned out underexposed, and I hadn’t quite nailed the focusing either. That made me want to work harder at my craft though, and since then I have invested in a Sekonic light meter and gotten through quite a few cameras which include a Contax 645, Contax G1&G2 (35mm), Mamiya RZ67 Pro ii, and now I use both a Fuji GF670 and a Hasselblad 500cm. 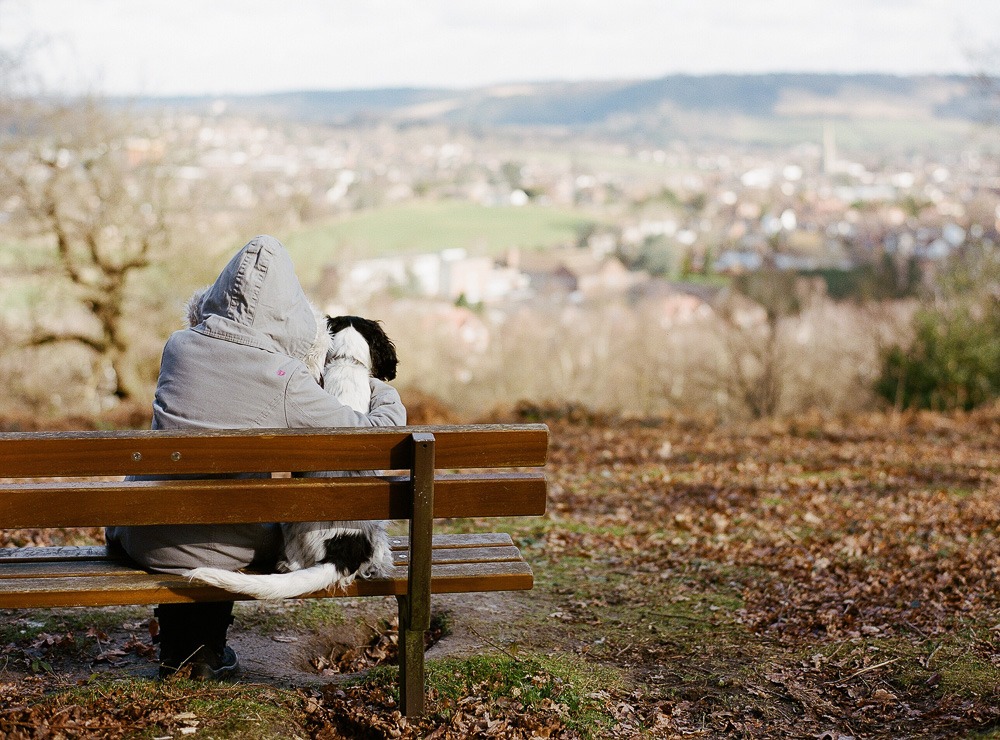 This is Angie and our dog Rafa up on a bench on one of our favourite walks where you can stop and get a great view of the town of Dorking. Again this was shot on the Contax 645 on Portra. I love the moment with Angies arm around Rafa and his tail looking though it is around her.

After using the Rolleiflex TLR I got a Contax 645, with the 80mm F2 lens. This camera and lens combination are made to be shot open at F2 for the best results, however nailing the focus at that aperture on medium format, whilst handheld really is a dark art! When you do nail it the results are amazing, however I would say I had around a 50% success rate which was too low for the cost of shooting film.

I decided to go back to what I enjoyed about the Rollefilex which was waist level finder, and invested in a Mamiya RZ67 Pro ii, which was quite a big jump in size! You can pick up these systems for a really reasonable price, and the image quality truly is amazing.
That said, I decided I wanted to get something a bit smaller, and my research led me to the Hasselblads. The 500cm cameras used to be the standard camera for RAF photographers so I put up a post on a RAF photographers Facebook group to see if anyone had kept their kits. Luckily someone had and they were able to sell it to a fellow airmen for a good price.

For me the Hasselblad is my favourite I have ever used. The finder is amazing, and the mechanical noises it makes when you take the photo, and then wind on to the next shot are too cool! I found the Mamiya could startle subjects as it sounds like a weapon being fired when you press the shutter! I also use a folding rangefinder, the Fuji GF670. I am still getting used to the rangefinder system but it produces lovely images, and as the lens folds into the body its so easy to carry around with you everywhere 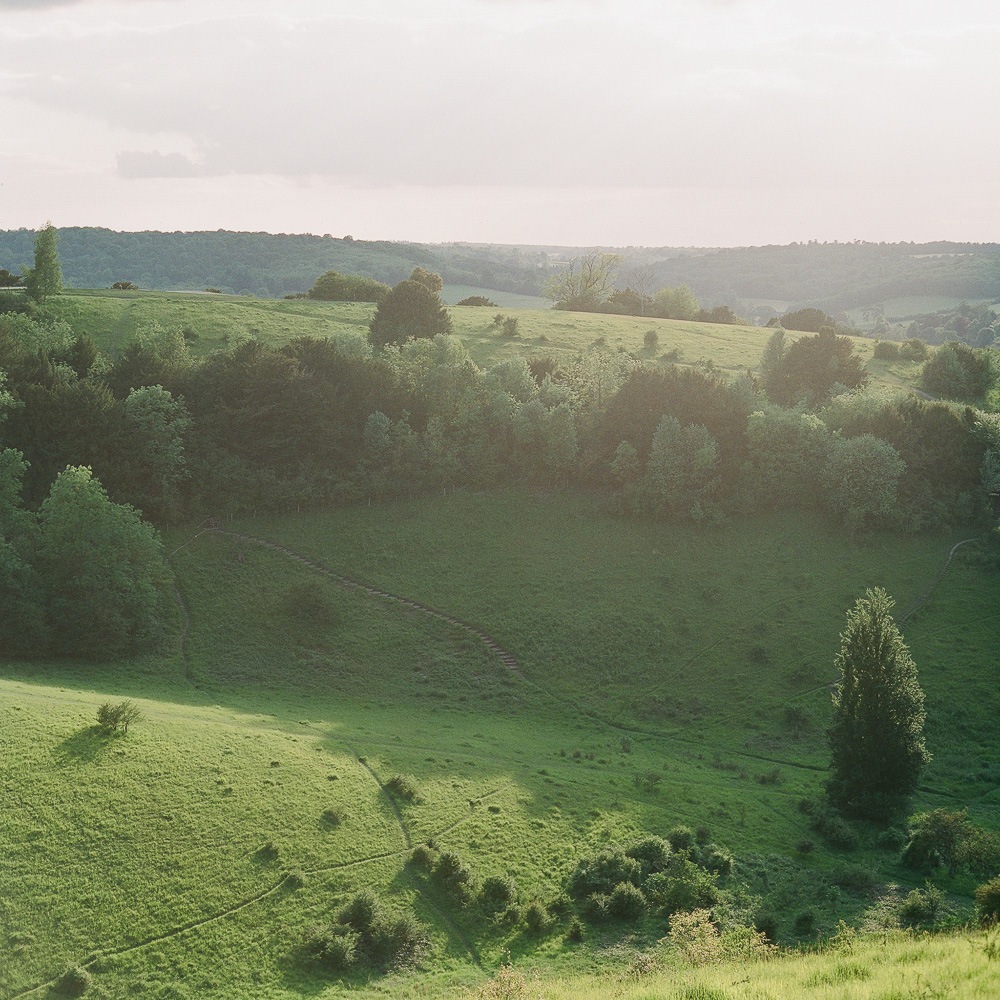 Dorking lies within the Mole Valley and is surrounded by hills on each side. This was taken up Boxhill and I loved the different trees, green tones, and the lighting and shadows with the lines of the different paths. This was shot on the Contax 645, but I felt it worked better in the square format. I might be wrong but I think this might have been shot on Fuji Pro 400H. This show reminds me of home - the Surrey Hills. 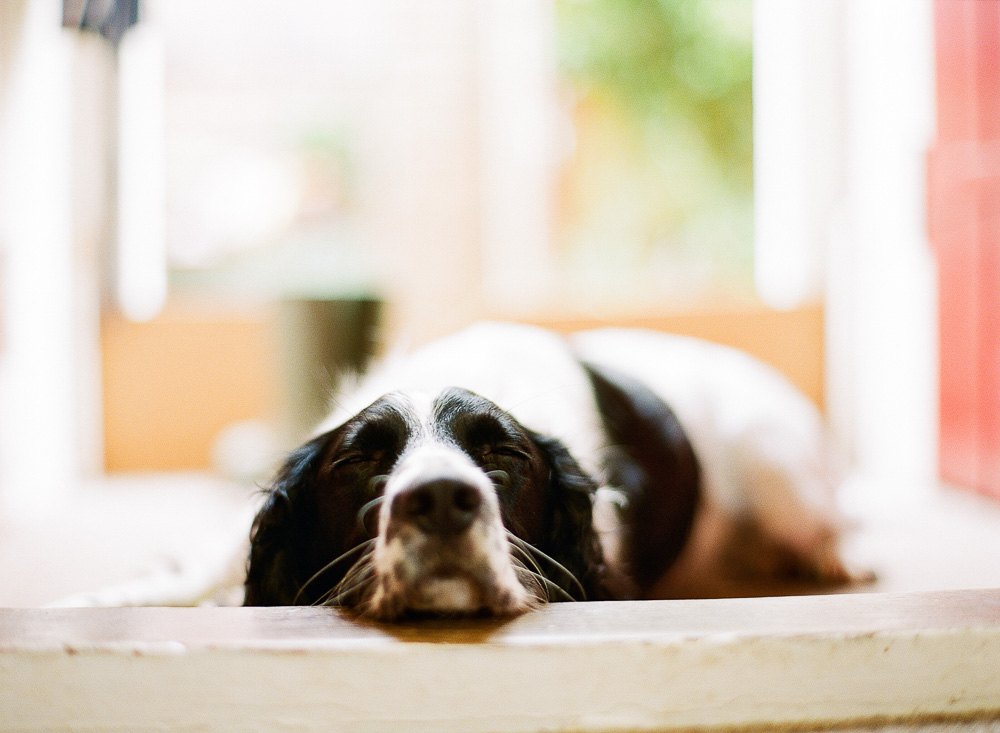 Rafa sleeping - Another Contax 645 shot on Kodak Portra 400. I liked how the light was hitting the top of his head and nose whilst he was getting in a quick nap. I think the space I left above his head gives you the chance to wonder what he was dreaming about.

I am really into the work of Taryn Simon who shoots large format, as well as medium format photographer Laura Pannack. I would say they all have quite differing approaches though. I saw a Taryn Simon exhibition in Paris last year, and it was without a doubt the best exhibition I have ever been to. It is hard to find interesting exhibitions, or at least find an exhibition where the majority of the work in interesting.
I often walk passed a lot of work in exhibitions (which could say more about my attention span), where as in this Taryn Simon exhbition I had to look at, and read, everything. It was all interesting. I like how Taryn Simon presents you with an image accompanied by a large amount of text, and even artefacts, to try and fix the meaning of an otherwise ambiguous photograph. The image intrigues you, and then the text/artefacts define exactly what you are looking at.

With Laura Pannack however she takes beautiful photographs, and then leaves them as ambiguous images for you to come to your own conclusion as to why the image was taken, or what the story is. Her subjects always seem to express a vulnerability as well, it's a skill to be able to capture them in that way.

I am half way through doing a masters in Photojournalism which is why I became attracted their work. Previously through commercial photography I had only been involved in creating the image, where as now I am really interested in the relationship between image and text, and this is something I will be exploring a lot more for my future work. 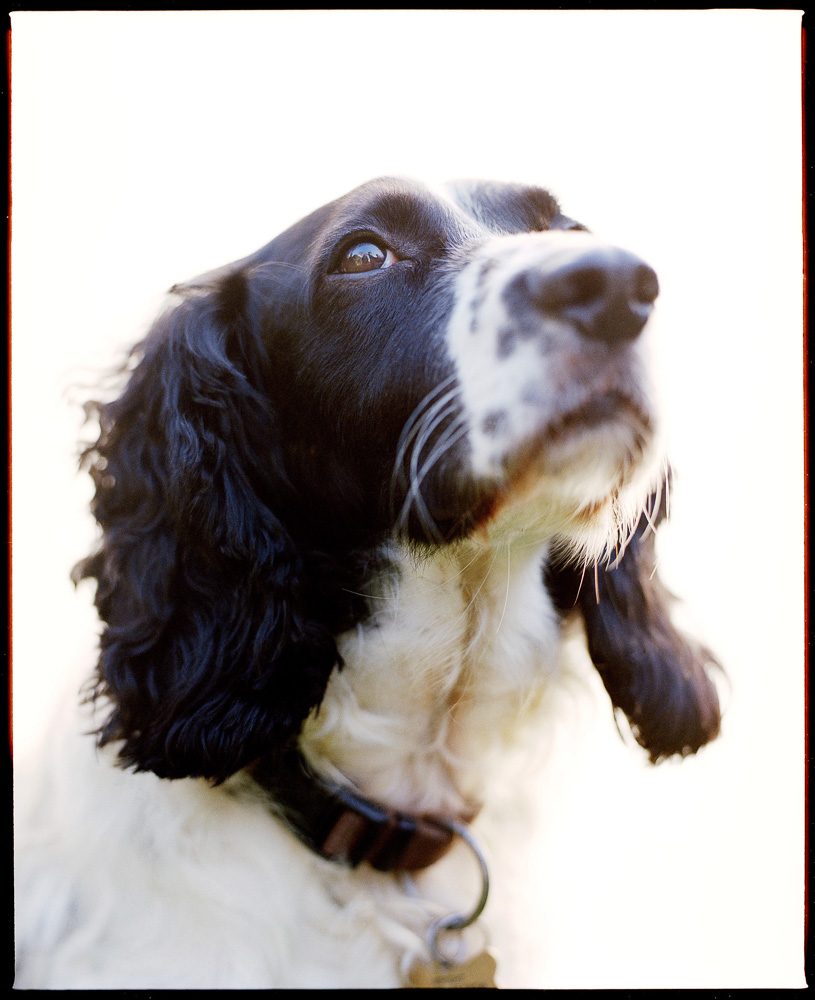 Rafa portrait. This was shot on the Mamiya RZ67 on Portra 400, and was the only film I have managed to develop and scan myself. Through work at the time I had access to a C42 film lab, however it was designed for large aircraft film rolls, so it was quite fiddly to get a 120 roll to feed in without damaging it! The photo was taken on a sunny day with a with diffuser held behind him to give a really clean portrait, with soft backlighting.

This was shot on the Fuji GF670 on Kodak Portra 400, and is of Rafa and my Mum. When shooting square I really like to compose symmetrical shots so I like having their heads on top of each other in the centre of the frame looking in different directions.