"In the end, developing negatives, printing in the darkroom, playing around with chemicals was what made up my mind and made me shoot only film now"

Hey, I’m Rossella and I’m 21. I’m from Italy but I have been living in London since two years now. I
am attending my last year of Photographic Arts.

Tell us about the project Citizens

CITIZENS is an attempt to show how different ethnicities are cooperatively working and living here in London all together.
I decided to capture these incredible and huge cultural diversities in order to explore the distinction between various identities. Thus, I focused just on one street of a particular borough of London. As I recently moved to Kilburn, I chose to take portraits of people I am used to seeing almost everyday, walking up and down Kilburn High Road. 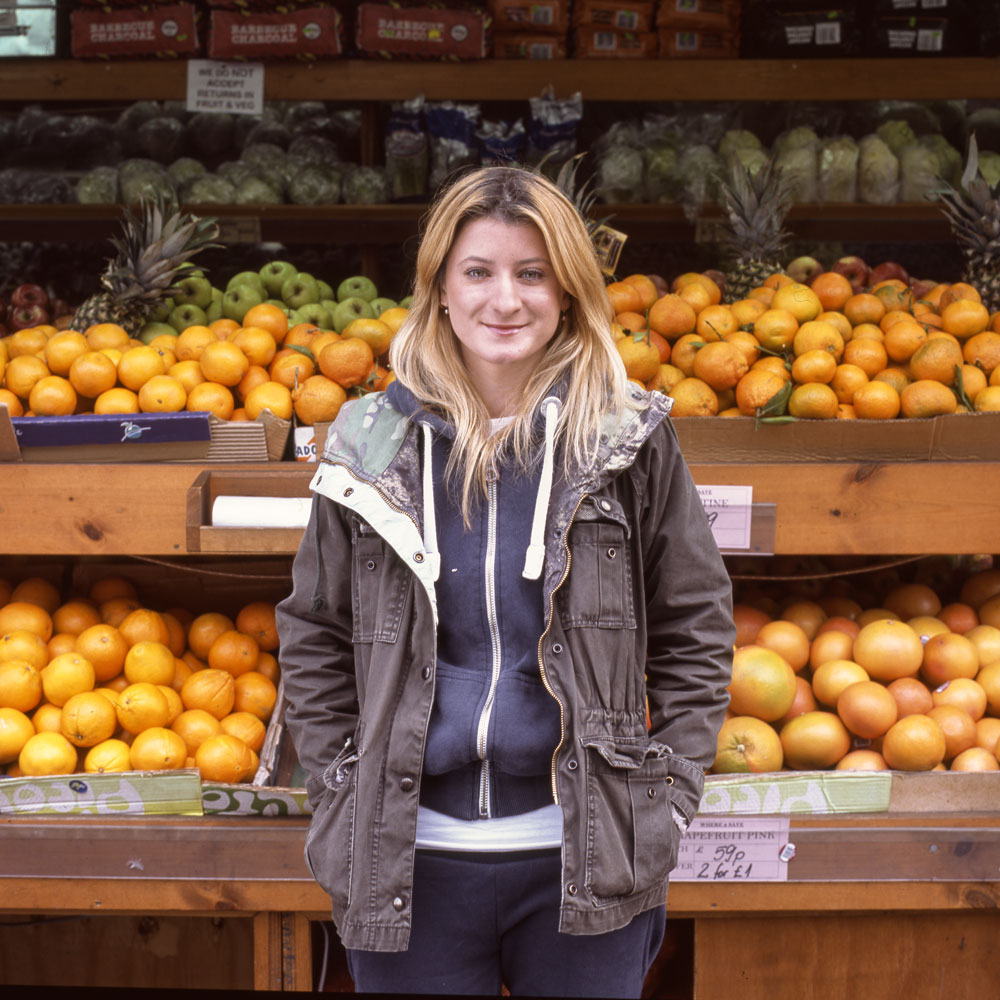 ‘London reminds me of freedom as nobody here is judged.’

The book contains a series of 10 formal portraits of owners of different kinds of shop. I have asked each one of them two questions, “What do you think when I say ‘London’ “ and “What is the first thing that comes to mind when you think of your country?” Their answers are on the left hand side pages. Even though no one of them was originally born in England, they look at this country as their homeland. At the beginning, what I found more difficult was asking the subjects to be photographed. Explaining the project was a bit hard since I was focusing on such a debated topic like, cultural diversities and ethnicities, and some of the people I met were not really up for it. Some of them just said ‘No sorry, I’m not interested in that’; some others were a bit more rude. Even some of the people I actually photographed at the beginning were a bit unsure about saying ‘yes’. 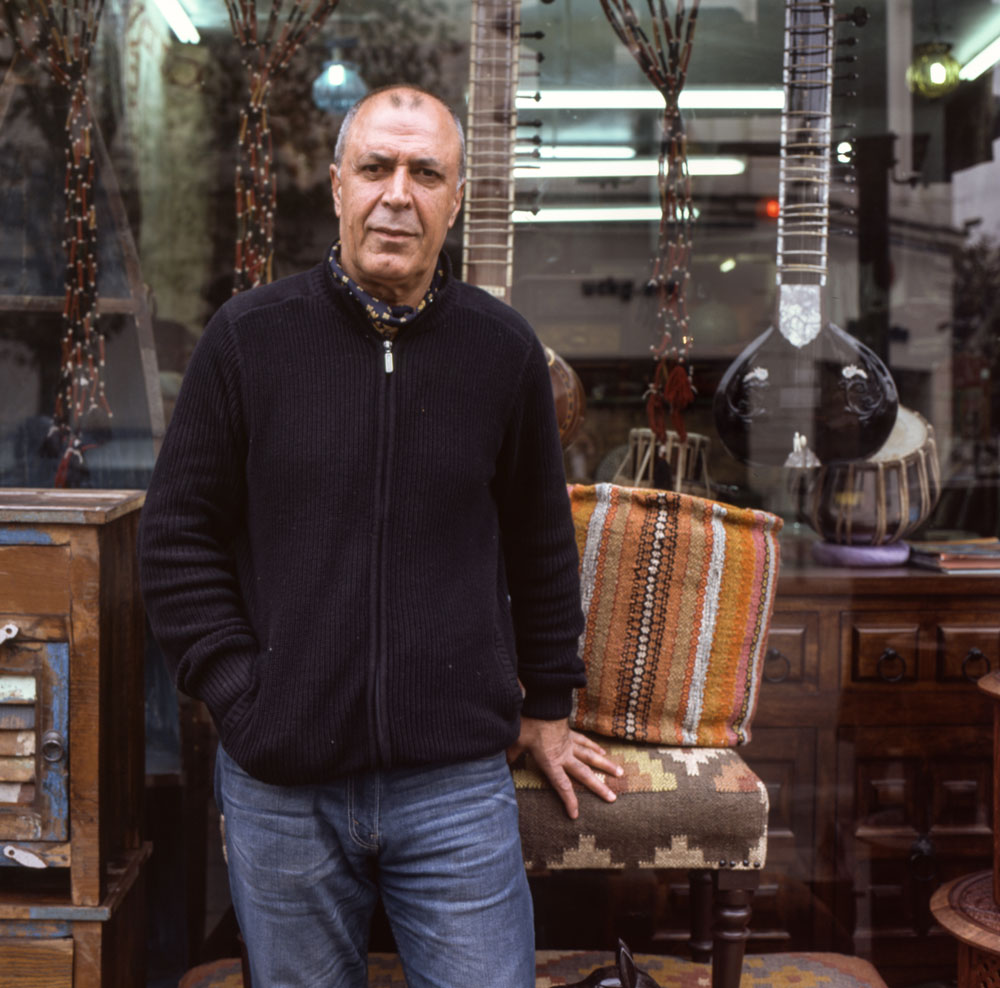 ‘This is a big town, with a big name, history and greatness. My homeland? I have good memories and laughs when I think about it.’

All of them told me to be quick while shooting; they affirmed they had just five spare minutes since they had to go back inside their shop to work. I was worried about asking people for portraits; however, you never know what the answer would be until you decide to talk with them. Once I finished the project, I printed the ten final portraits and I went back to each shop, giving the pictures to the owners. After giving the images, I asked them two questions (“What do you think when I say ‘London” / “What is the first thing that comes to mind when you think of your country?). I thought that asking the questions would have had a better outcome after showing the final images, in order to create a relationship with the subjects and go a little further in their lives. I then created a little book with the images. I placed on the left side the answers of the questions, without revealing which country they are actually from. Have a guess! 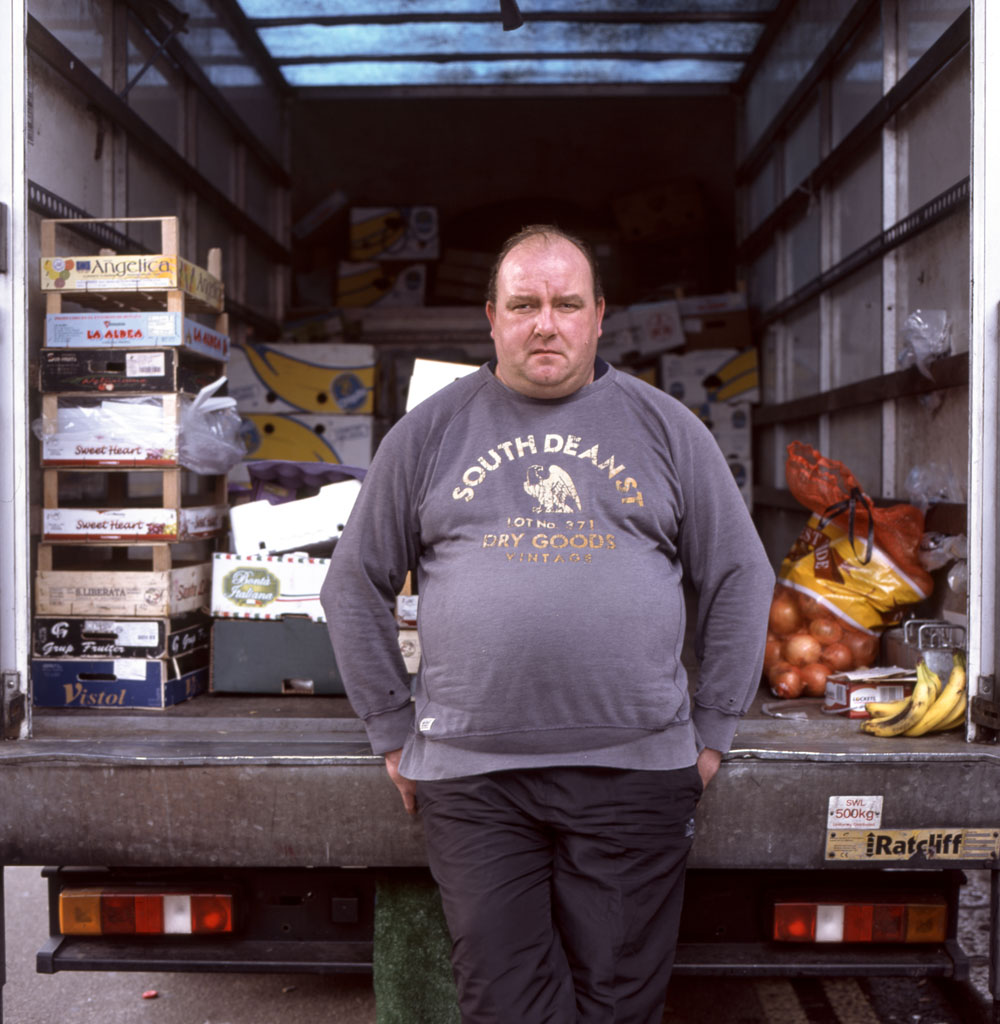 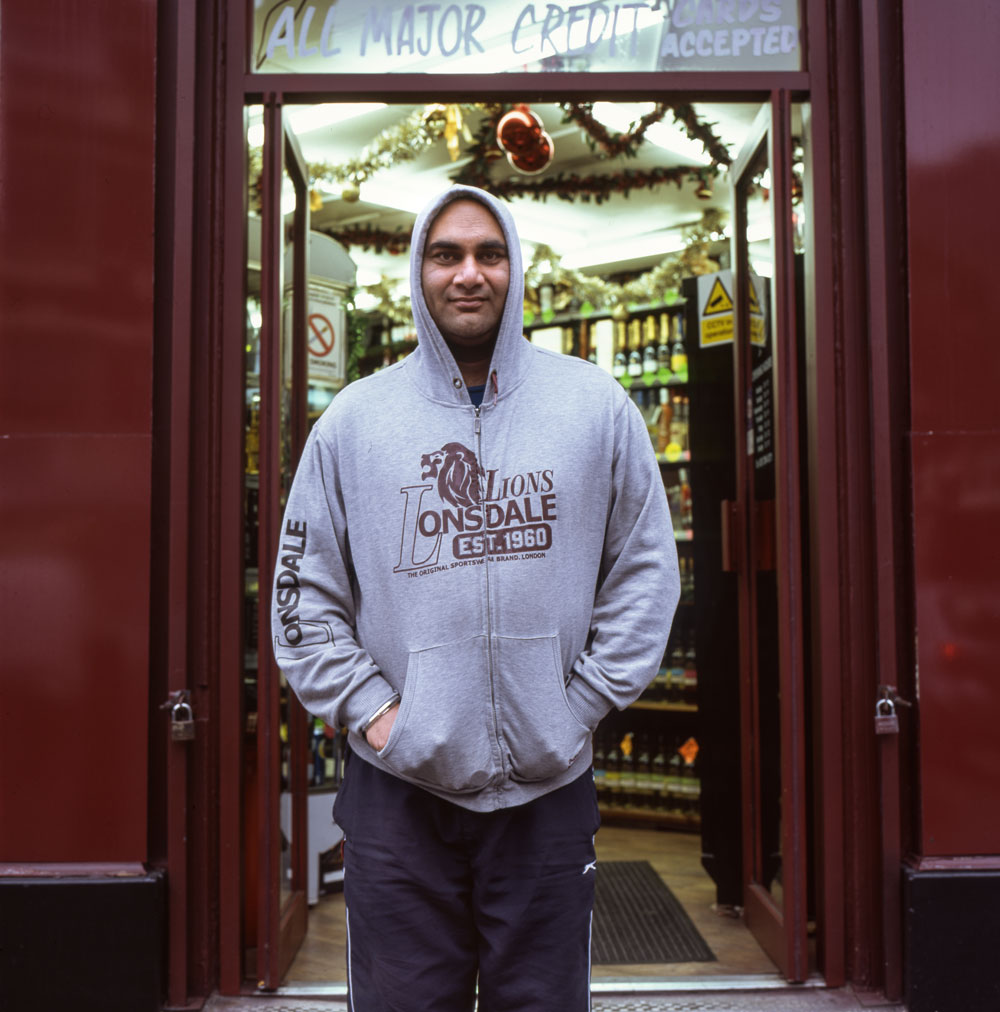 ‘I have the same feeling; I am so happy to live here in London but at the same time, I feel the same love for my country.’ 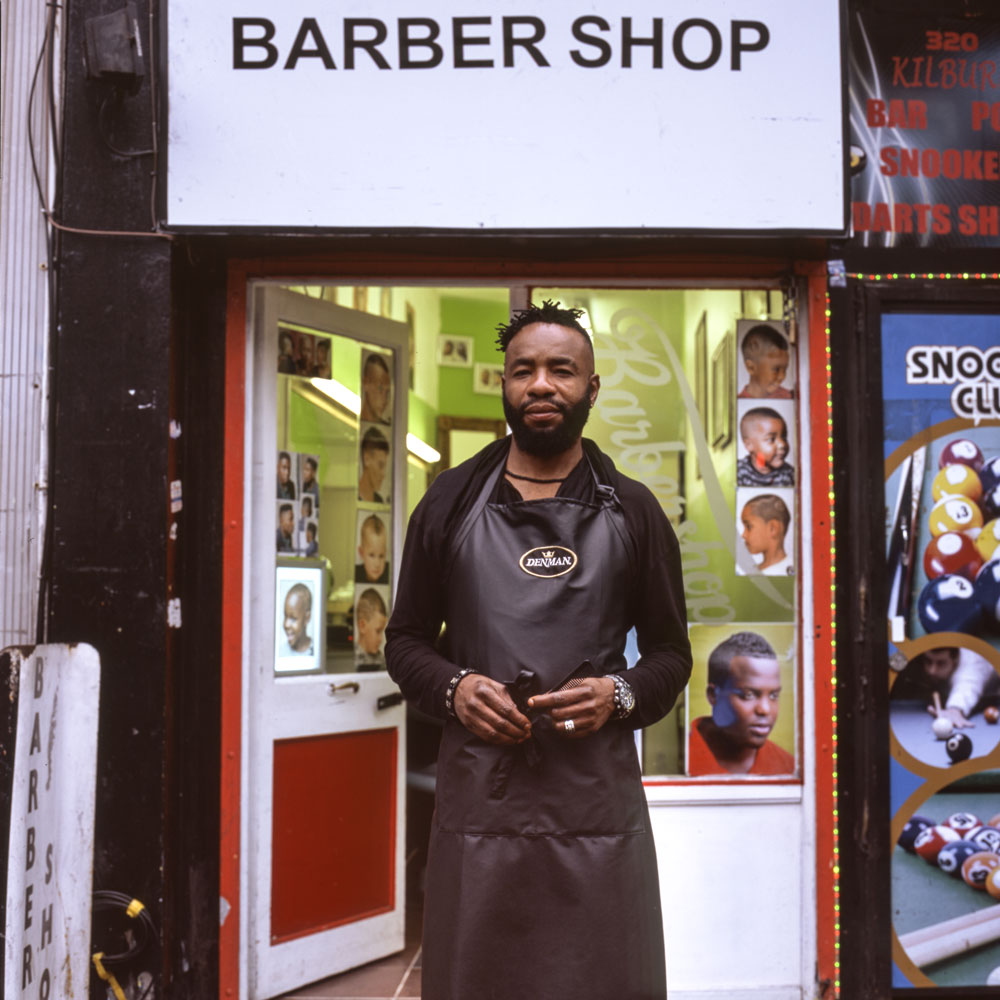 ‘It has been 27 years since I came here. London is London. My country is my country. They are completely different. I live two lives.’

Let’s say that my first attempts using film cameras were a disaster. I loaded my first film into a fish-eye Lomography camera and I started shooting, feeling really exited about it. The excitement
ended up being a catastrophe as I didn’t load the film properly, so I didn’t shoot a single picture. My second attempt was with my granddad’s Voigtlander. This was another disaster so I decided to give up and carry on with DSLR cameras. However, during my first year at uni I had to face my fear of shooting with film cameras. In the end, developing negatives, printing in the darkroom, playing around with chemicals was what made up my mind and made me shoot only film now.

I now use a Pentax ME Super or Kodak disposable cameras, and sometimes a medium format Hasselblad 500 C/M.

It always depends on the subjects. In general, I prefer colour, but I love shooting with black&white film with super high ISO, like 3200. I love the grain and the high contrast. 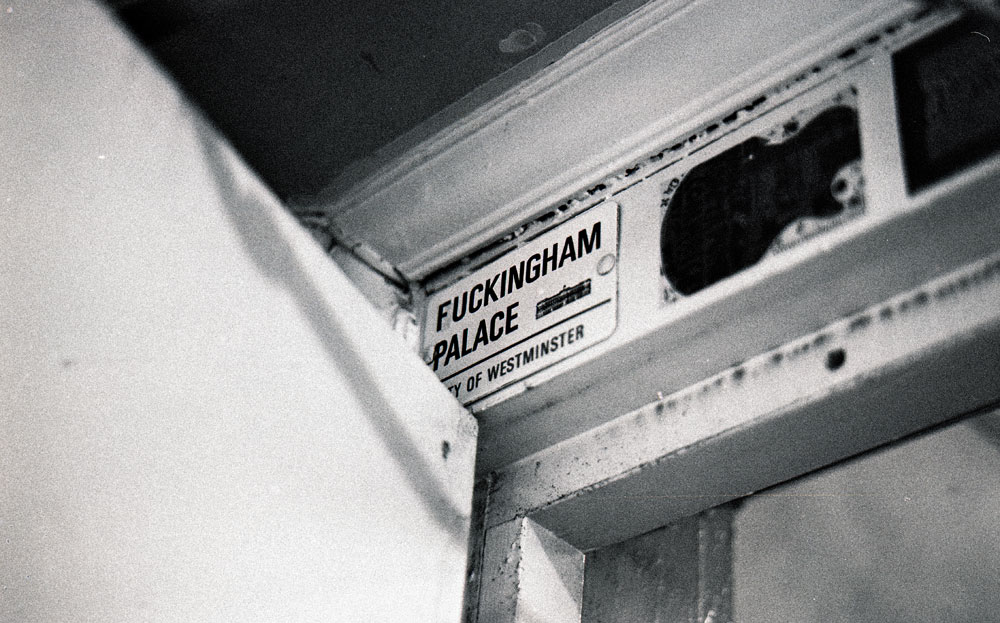